Rosie Fiore was born and grew up in Johannesburg, South Africa. She studied drama at the University of the Witwatersrand and has worked as a writer for theatre, television, magazines, advertising, comedy and the corporate market. She has lived in London for the past fifteen years. Her first novel, This Year's Black, was longlisted for the South African Sunday Times Literary Award. After Isabella was her most recent novel. Rosie also writes under the name Cass Hunter. 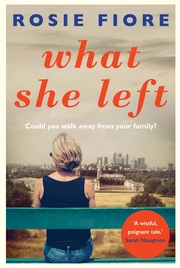