Vince Cable is Leader of the Liberal Democrat party and MP for Twickenham, where he also served from 1997-2015. He was the Liberal Democrat's chief economic spokesperson from 2003-2010, having previously served as Chief Economist for Shell from 1995-1997. He was Business Secretary under the Coalition Government from 2010-2015. Cable has published three non-fiction books with Atlantic to critical acclaim: Free Radical, The Storm, and After the Storm. Open Arms is his debut novel. 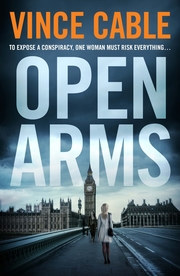