Bridie Jabour is a writer who has worked as a journalist for News Corp, Fairfax and Guardian Australia.

Bridie has written commentary on inequality, feminism and pop culture. She appears regularly on the ABC, Sky News, Triple J and ABC radio Sydney and is co-host of the podcast Behind the Lines.

Bridie is assistant news editor at Guardian Australia where she has reported on social affairs, politics and regional issues. She has worked in the Canberra press gallery and was a reporter for Brisbane Times after starting her career at the Gold Coast Bulletin in Queensland. She has been nominated for New South Wales and Queensland media awards for her coverage of the Lindt Cafe Siege and Queensland state politics.

She has hosted live shows for the Guardian and appeared on panels at various writers' festivals as a moderator and contributor. She has 20,000 + fans on social media across Twitter, Facebook and Instagram. 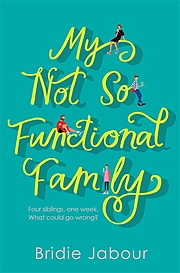 My Not So Functional Family