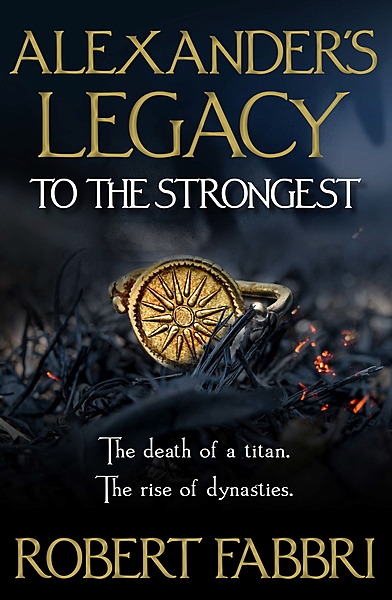 The first book in a huge, bloody and brutal new series from Robert Fabbri, set after the death of Alexander the Great. Who will win the fight to control the largest empire the world has ever seen? Let the battles begin...

Alexander's Legacy: To The Strongest

Babylon, 323 BC: Alexander the Great is dead, leaving behind him the largest, and most fearsome, empire the world has ever seen. As his final breaths fade in a room of seven bodyguards, Alexander refuses to name a successor. But without a natural heir, who will take the reins?

As the news of the king's sudden and unexpected death ripples across the land, leaving all in disbelief, the ruthless battle for the throne begins. What follows is a devious, tangled web of scheming and plotting, with alliances quickly made and easily broken, each rival with their own agenda.

But who will emerge victorious: the half-chosen; the one-eyed; the wildcat; the general; the bastard; the regent? In the end, only one man, or indeed woman, will be left standing...

Robert Fabbri read Drama and Theatre at London University and has worked in film and TV for 25 years as an assistant director. He has worked on productions such as Hornblower, Hellraiser, Patriot Games and Billy Elliot. His life-long passion for ancient history inspired him to write the Vespasian series. He lives in London and Berlin.

It was just awesome, the story, the characters... bravo to the writer, I wish I could read it for...

Historical fiction at its finest

I studied Greek and Roman history at school and have always loved that period of time. I really...

One of the Strongest

This is one of the strongest historical novels I have read. I know about Alexander the...

A historical society that built an empire! This thrilling action packed story about power and...

I love historic novels and especially one with lots of plot twists and interesting characters...

Not my usual cup of tea with reading categories but I was pulled in from the start right to the...