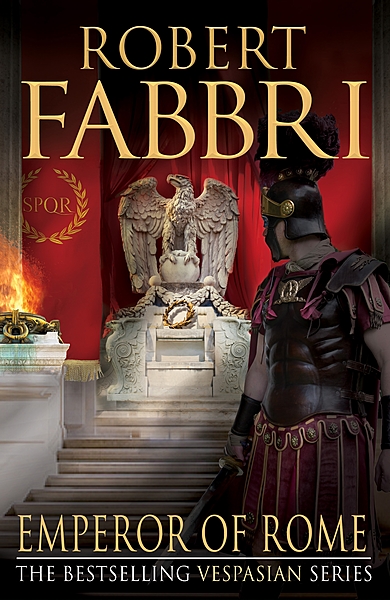 The final, thrilling instalment in the epic Vespasian series from the bestselling author, Robert Fabbri.

Rome, AD 68. Vespasian is tasked with the impossible. Should he quell the revolt in Judaea, as Nero the emperor has instructed, or must he resort to the unthinkable and sabotage his own campaign? If his conquest succeeds, he risks becoming the sole object of the mad emperor's jealousy. If he fails, then his punishment will be severe. The fate of his men and his beloved son, Titus, all hang in the balance.

But unknown to Vespasian, Nero has committed suicide, catapulting Rome into political turmoil. Sabinus, Vespasian's brother, is caught between the warring factions of Aulus Vitellius, a cruel opportunist, and the noble Marcus Salvius Otho, who finds himself severely outnumbered. Seeing no aid on the horizon, Sabinus must rely on wit, and wit alone, to ensure the safety of his family.

With a contested throne and an army at his disposal, now may finally be Vespasian's time - to ascend, to conquer, to achieve what countless prophecies have foretold and take control of Rome itself. Will Vespasian, at long last, be the one to wear the purple?

Robert Fabbri read Drama and Theatre at London University and has worked in film and TV for 25 years as an assistant director. He has worked on productions such as Hornblower, Hellraiser, Patriot Games and Billy Elliot. His life-long passion for ancient history inspired him to write the Vespasian series. He lives in London and Berlin.

As a historian (currently doing a history degree). I am pleased to see that the author stays as...

Fantastic end to a brilliant series

I have followed the series from Tribune and have been eagerly awaiting the last volume. This was...

Vespasian believes that his destiny is to lead Rome to a better future but at present he is far...

Awe inspiring tale of the complex machinations of a Roman Empire tearing itself apart.

Roman life was far from simple especially after the death of the Emperor Nero and a succession of...

loved all the series building up to this. Brilliantly written and superbly researched. Filling in...

I like the book cover, very evocative of the times. This was a very cruel, uncertain period for...