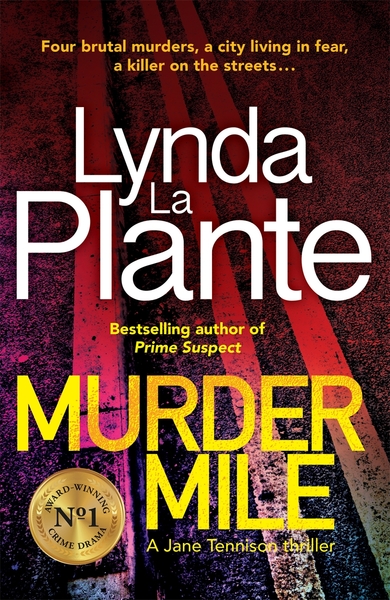 Prime Suspect meets Ashes to Ashes as we see Jane Tennison starting out on her police career...

The fourth in the Sunday Times bestselling Jane Tennison thrillers, MURDER MILE is set at the height of the 'Winter of Discontent'. Can Jane Tennison uncover a serial killer?

It is February, 1979, and economic chaos has led to widespread strikes across Britain. Jane Tennison, now a Detective Sergeant, has been posted to Peckham CID, one of London's toughest areas. As the rubbish on the streets begins to pile up, so does the murder count: two bodies in as many days.

There are no suspects and the only link between the two victims is the location of the bodies. Three days later another murder occurs in the same area. With press headlines claiming police incompetence, Jane is under immense pressure to catch the killer - before they strike again...

Lynda La Plante was born in Liverpool. She trained for the stage at RADA and worked with the National Theatre and RDC before becoming a television actress. She then turned to writing - and made her breakthrough with the phenomenally successful TV series Widows. Her novels have all been international bestsellers.
Her original script for the much-acclaimed Prime Suspect won awards from BAFTA, Emmys, British Broadcasting and Royal Television Society. Tennison was adapted by ITV and broadcast in March 2017 in the UK with international broadcast to follow.

Lynda is one of only three screenwriters to have been made an honorary fellow of the British Film Institute and was awarded the BAFTA Dennis Potter Best Writer Award in 2000. In 2008, she was awarded a CBE in the Queen's Birthday Honours List for services to Literature, Drama and Charity.

I loved this book. I loved the plot twists, and the massive plot twist at the end, oh my god. I'm...

Having recently been introduced to Lynda La Plante I can unashamedly say I am obsessed! Murder...

this book was exciting right from the first page. Took me 3 days to read. Loved it. Felt like...

I love the book cover. Its the type of cover I would like to see when I want to find a book to...

I love this author Lynda la plante I first read her books after a trip to the library but now buy...

I loved the time setting of the late 70’s for this book. I liked the way the book immediately...