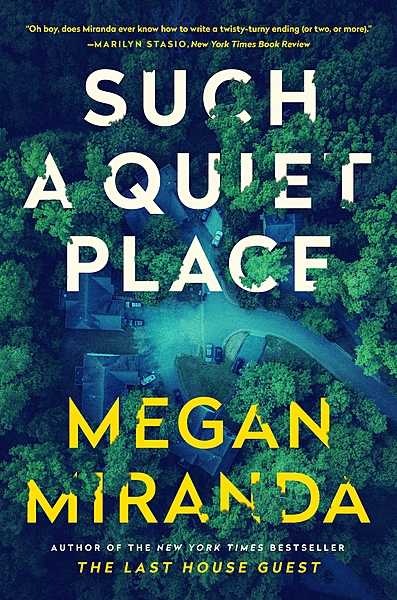 We had no warning that she would come back...

Such a Quiet Place

Welcome to Hollow's Edge - a picture-perfect neighbourhood where everyone has each other's backs. At least, that's how it used to be, until the night Brandon and Fiona Truett were found dead...

Two years ago, branded a grifter, thief and sociopath by her friends and neighbours, Ruby Fletcher was convicted of murdering the Truetts. Now, freed by mistrial, Ruby has returned to Hollow's Edge. But why would she come back? No one wants her there, least of all her old housemate, Harper Nash.

As Ruby's return sends shockwaves through the community, terrified residents turn on each other, and it soon becomes clear that not everyone was honest about the night the Truetts died. When Harper begins to receive threatening, anonymous notes, she realizes she has to uncover the truth before someone else gets hurt... Someone like her.

Megan Miranda is the author of the bestseller ALL THE MISSING GIRLS. She has also written several books for young adults. She grew up in New Jersey, graduated from MIT, and lives in North Carolina with her husband and two children. THE PERFECT STRANGER is her second novel of psychological suspense.

Love the writing style, the plot, the characters. The main character is very mysterious and makes...

I’m a huge fan of Megan Miranda’s books, I found one of her older books All the missing girls in...

Different..keeps you wanting to read more

When i started this book i wasn't captured straight away. It is different to the books i would...

Love the creepy feel of this book and how the main character returns to the original murder...

Just from the synopsis I can tell you that it's might kinda book! But reading the first look,...

A very direct and brutal start. In the few pages you are acquainted to probably all the...