Josie Lloyd's first novel, It Could Be You, was published in 1997 and since then she has written 15 bestselling novels (under various pen names), including the number one hit Come Together, which she co-authored with her husband, Emlyn Rees, which was number one for 10 weeks, published in 27 languages and made into a Working Title film. Josie has also written several bestselling parodies with Emlyn, including We're Going On A Bar Hunt, The Very Hungover Caterpillar and The Teenager Who Came To Tea. 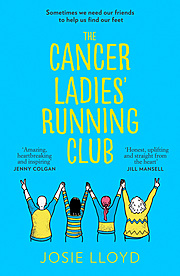