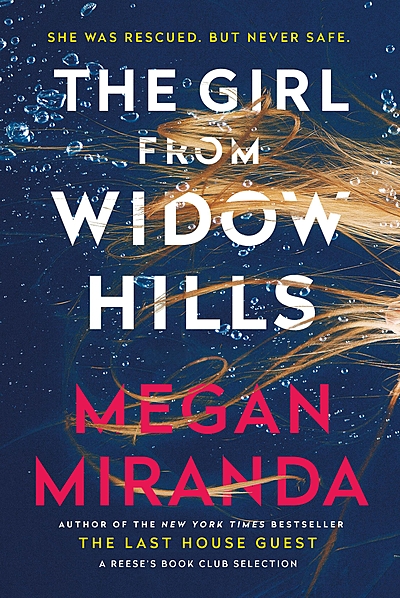 The twisty new thriller from the author of Reese's Book Club pick The Last House Guest.

The Girl from Widow Hills

Everyone knows the story of the girl from widow hills...

When Arden Maynor was six years old, she was swept away in a terrifying storm and went missing for days. Against all odds, she was found alive, clinging to a storm drain. Fame followed, and so did fans, creeps and stalkers. As soon as she was old enough, Arden changed her name and left Widow Hills behind.

Twenty years later, Olivia, as she is now known, is plagued by night terrors. She often finds herself out of bed in the middle of the night, sometimes streets away from her home. Then one evening she jolts awake in her yard, with the corpse of a man at her feet.

The girl from Widow Hills is about to become the centre of the story, once again...

NOTE: This is a physical book giveaway, which will be dispatched when the warehouse re-opens.

Megan Miranda is the author of the bestseller ALL THE MISSING GIRLS. She has also written several books for young adults. She grew up in New Jersey, graduated from MIT, and lives in North Carolina with her husband and two children. THE PERFECT STRANGER is her second novel of psychological suspense.

Really enjoyed this book, very different concept to those I usually opt for which made a pleasant...

I- wow…just wow… I can’t begin to explain how AMAZING this book is. From what I have read, it is...

It was a while between me getting this book, and actually reading it, so therefore come the point...

This book looks really interesting with a novel intriguing plot . The blurb makes it sound fast...

I love a good mystery and this sounds chilling. A girl gone missing then found alive and who...

Ooh this is an exciting start to a book written by a new author for me. Like the cover too. I...