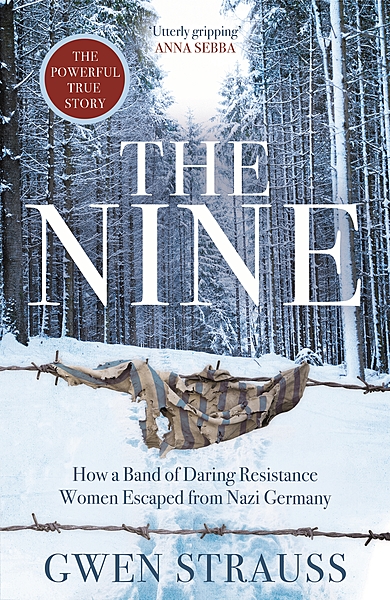 The nine were ordinary women, some still in their teens, who joined the French and Dutch Resistance in the face of Nazi horror and oppression. Caught out in heroic acts against the brutal regime, they were each tortured and sent East to a forced labour camp, where they formed a powerful friendship, determined to survive, together. This harrowing interlude was only the beginning. In 1945, as the war turned against Germany, they were forced on a Death March, facing starvation and almost certain death. They saw a chance, fled, and so began one the most breath-taking tales of escape and resilience of WWII.

The author is the great-niece of one of the nine, and their gripping flight across war-torn Europe is interwoven with her own detective work, as she uncovers the incredible escape and survival of the nine, creating a powerful, heart-stopping tribute to the power of humanity in the darkest of times. For too long stories of courage from WWII have been about men: here is a group of women heroes who fought fearlessly against the Germans and lived to tell the tale.

Gwen Strauss is an award-winning children's book author and poet. Her poetry, short stories and essays have appeared in numerous places including The New Republic, New England Review, Kenyon Review, London Sunday Times and Catapult. She lives in Southern France with her three children and her dog Zola, where she works as the Director of the Dora Maar House, an artist residency programme.

This was a mind-blowing story written in an enticing and filled with suspense. in 1945 nine...

This book is not for the faint hearted and made me cry for the nine women and the others who they...

Wow this was just mindblowing, such an exciting yet terrubly sad story. In 1945 nine women were...

I love historical fiction, especially set during war times. And I love it when it's about strong...

First impressions on this book is that it seems a powerful read, showing how empowering and brave...

Whilst not the type of book that I would usually go for, I have been amazed by this book. A...