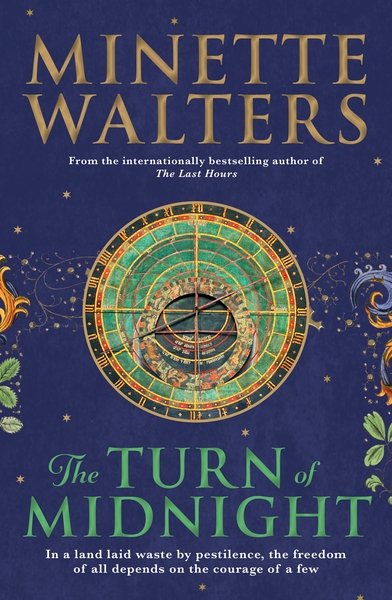 The exquisitely wrought and thrillingly gripping second novel set during the time of the Black Death from Minette Walters.

The Turn of Midnight

As the year 1349 approaches, the Black Death continues its devastating course across England. In Dorseteshire, the quarantined people of Develish question whether they are the only survivors.

Guided by their beloved young mistress, Lady Anne, they wait, knowing that when their dwindling stores are finally gone they will have no choice but to leave. But where will they find safety in the desolate wasteland outside?

One man has the courage to find out.

Thaddeus Thurkell, a free-thinking, educated serf, strikes out in search of supplies and news. A compelling leader, he and his companions quickly throw off the shackles of serfdom and set their minds to ensuring Develish's future - and freedom for its people.

But what use is freedom that cannot be gained lawfully? When Lady Anne and Thaddeus conceive an audacious plan to secure her people's independence, neither foresees the life-threatening struggle over power, money and religion that follows...

Minette Walters is one of the world's best-selling crime writers. She is the author of twelve novels, winning the CWA John Creasey Award for The Ice House, the Edgar Allan Poe Award in America for The Sculptress and two CWA Gold Daggers for The Scold's Bridle and Fox Evil. The Last Hours marks an exciting new direction for Minette. She lives in Dorset with her husband.

The Turn Of Midnight is the much anticipated follow up to Minette Walters The Last Hours. Book 1...

I was lucky enough to receive a copy of this book and so pleased to have read it. The book is...

This is a continuation of the Last Hours and completes the journey of Thaddeus and his friends. ...

I was interested in reading the extract of this book as I’ve read Minette Walter’s thriller books...

The Turn of Midnight

What a great story telling. I love historic / fantasy thrillers. I wish I could read the first...

Can't wait for the sequel

Having read the first book in this series and loving it, I have been eagerly awaiting the sequel...